Shungit on the island of Kizhi 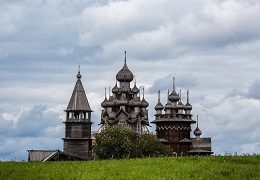 The only stone that is mined only on the territory of Russia, in the only place - in Karelia. Deep black color allows you to use it in decoration as well as in jewelry. In addition to color, its effect on a person is especially appreciated. This stone was called shungite because of the proximity of the village of Shunga in the place where shungite was first discovered. 1812 from the rock containing shungite, extracted black paint, which was distinguished by resistance.
Kizhi Island is one of the numerous islands of the northern part of Lake Onega, on the shores of which stands the city of Petrozavodsk, the capital of Karelia. At present, Kizhi Island is of world renown. The whole island is an open-air museum of wooden architecture. Here is the State Historical-Architectural and Ethnographic Museum-Reserve "Kizhi". The basis of the museum consists of the buildings of the ancient Kizhi churchyard - the Church of the Transfiguration, the Church of the Intercession of the Holy Virgin, the Bell Tower standing between them and the fence of the churchyard. Light, picturesque silhouettes of the buildings fit organically into the harsh northern landscape and make up a harmonious, uniquely beautiful ensemble. In 1990, by decision of UNESCO, the architectural complex of the Kizhi Pogost was included in the World Cultural and Natural Heritage List.
About amazing Kizhi land.
During the reign of Catherine II, active measures were taken for the widespread cultivation of potatoes, but the people in Russia did not welcome this undertaking until 1765. In Finland, then a terrible famine broke out, and already ordered to grow potatoes in all places of the empire. But how is it possible to grow on the northern land covered with boulders? And here shungit saved everyone. It turned out that with prolonged exposure to wind, rain and sun on schungite layers, an earthy, friable rock is formed. The people called her “Olonets black soil”. This soil surpasses all other black soils in its fertile qualities. Naturally, Karelian land was the main supplier of high-quality potatoes for Finland. And until now, residents of the island and the nearest settlements are very careful about their land, planting plants literally at every centimeter.
If you look at this shungit black soil from the point of view of physics, it becomes clear that the black color of the soil plays the role of thermal control. During the day, sunlight is absorbed, and at night it is given in the form of thermal energy. Thus, the soil itself and the air layer above it are heated, therefore the plants are provided with favorable conditions. In the north, the preservation of heat in the soil is always of paramount importance.
At the moment, biologically active drugs are manufactured on the basis of shungite, to increase yields.

6.66 USD
Success Add to cart
A single set of protection 5% off