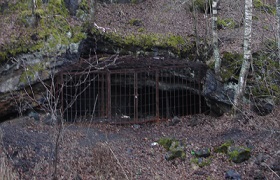 In the north of Karelia (Shunga village) there is a real natural monument - an abandoned tunnel for the extraction of elite aspidum. This is the place where shungite was first discovered.
Elite shungite is valued above other minerals of its type. Its feature is explained by the high content of carbon (20% higher than the usual mineral). In its composition, the mineral contains a multitude of micro- and macroelements: sulfur, barium, boron, vanadium, molybdenum, nickel, strontium, lead, zinc, copper; oxides of magnesium, silicon, calcium, aluminum, titanium, iron, phosphorus, manganese. Due to the increased content of fullerene particles, the elite mineral quickly and more qualitatively gives useful elements and absorbs harmful impurities. Minerals of the elite shungite stand in line with the famous precious stones, thanks to their unusual silvery overflows.
During the reign of Peter I, local residents in the village of Shunga called the mineral a "winged black snake". Attributed to him a miraculous, magical power. Actively used in the treatment of various diseases.
The gallery in the village of Shunga has been abandoned since the end of the 19th century, but has been preserved to this day. It consists of two branches: short (about 10 meters) and long, has additional moves. The total length of the quarry is about 200 meters, the height is more than two meters. Some of the drifts have long been inundated, perhaps they have a continuation. In the 30s of the 20th century, the deposit was attempted to recover for the extraction of high-carbon raw materials, which would replace coal, but the plan was not implemented.
At present, the mine is a public place, however, grids are installed at the entrance. In spring, during the active thawing of snow, the gallery is completely flooded.