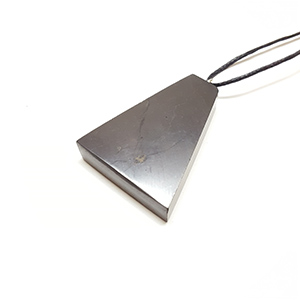 Nature in man lies the desire for the perfect, symmetrical. Harmony of geometric shapes is known from ancient times. Even primitive people believed in magic and healing with the help of various simple figures, inscriptions, for example, on rocks.

Geometric harmony, characteristic of everything in the universe, determines the order and is called the Divine geometry. The strictness of lines sets a person to a simple and understandable course of life, in which there are unshakable rules, certain forces act. All this is different from the chaos in which we often live, living in megacities.

People far from esotericism also can not see the beautiful in clear geometric lines. Loving with geometric proportions is used in both exact sciences and in spiritual activity: architecture, philosophy, aesthetics ...

A shungite pendant in the form of a trapezoid will satisfy the taste and needs of both those who believe in esoteric teachings and those who wish to enjoy exquisite and unusual things in their life. Trapezium in translation from ancient Greek means "table". As you know, the "table" symbolizes abundance, home comfort, a family that in Russia is called a "full cup", that is, a family with prosperity, with well-being. If you turn to alternative medicine, then the form of the trapezoid is considered curative, curing skin diseases, facilitating fever and Parkinson's disease.

Shungite - a special mineral, able to protect its owner from harmful electromagnetic radiation, helps to protect itself from negative influences from ill-wishers, helps to restore strength.