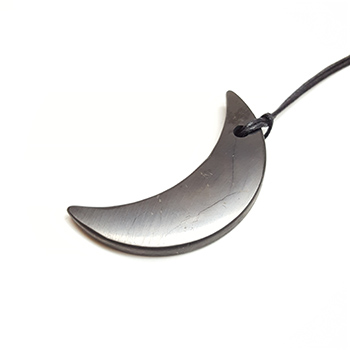 A month is one of the oldest multi-valued symbols. For example, in Ancient Greece, he was associated with purity and crowned the head of the goddess Artemis.
The crescent is used in religious symbols, for example, in Orthodoxy, the crescent is sometimes located in the lower part of the cross. Such crosses adorn the ancient churches: the Church of the Intercession on the Nerl (1165), the Dmitrievsky Cathedral in Vladimir (1197) and others.

In Hinduism, the symbol of the growing moon is also associated with iconography.

He is wearing Shiva in his hair. Crescent is a vessel with soma, nectar of immortality. It symbolizes control over the mind.

Crescent with a star - serves as a symbol and banner of the Ottoman Empire and Islam.

A month can be seen on the arms and flags of various states and organizations, including the International Red Cross and Red Crescent Movement.

The symbol of the month can mean something personal, personal.

A pendant with a crescent symbol is an exquisite decoration for both men and women. The classic black color of the stone will complement the image, harmoniously fit into any style.

A unique stone is shungite, not just an ornament. Shungite is mined only in Karelia, not far from the largest in Europe Lake Onega. The climate and unique geological processes made it possible to form such a rock, which is not known on the planet Earth, but is found in space. Shungite is able to shield, protect from harmful influences, maintain human strength in a harmonious balance.