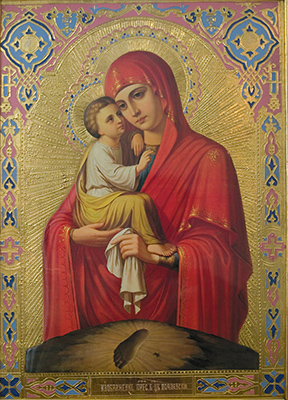 The icon is the embodiment of church stories and saints, is an object of worship. It is not identified with painting, in the usual sense of the word, but it is a phenomenon of Orthodoxy culture. In a broad sense, "icon" is similar in meaning to the concept of "symbol", but contains a more pronounced element of representativeness. A symbol is an expression of an individual idea, an icon of individuals and objects.
Icon - the most important symbol in the house of a believing family. At the moment, the popularization of the Orthodox faith is growing every day. This current can give a powerful impetus to the development of spiritual values.
Classify icons can be on various grounds. For example, in terms of value: wedding, holiday, nominal, dimensional, oberezhnye, family and others.
According to the technique of execution, the following are distinguished: embroidered icons - sewing, cast icons, carved icons, printed or typographic icons, vaulted altar - a folding icon made of several hinged boards covered with a picturesque image on both sides; pictorial icons, among which can be called: encaustic, that is, they are performed by special technique, in which wax is the binding agent of paints. Work is carried out by molten paints. Tempered icons - paints are used, which include powder pigments and synthetic analogues.
There is a special, rather rare technique for performing icons - on the shungite. Not every master can afford to work with this very rare material. In addition to its natural beauty, shungite has many healing properties.
There is an opinion that combining this special material with a spiritual symbol, as a result, a reliable defender and amulet turns out. Among other things, images on the shungite have a special beauty and energy. A small personal icon on the shungite will not only be a good gift to yourself or loved ones, not just a fashion accessory, but really a symbol of faith, able to protect against all bad things.