Using shungite for birds and animals. 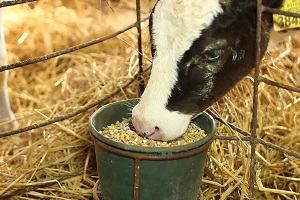 The unique properties of shungit rocks for a long time did not have a direct purpose. Scientists around the world have worked on studying the chemical and physical properties of a rare mineral. At the end of the twentieth century, the discovery of fullerene in the shungite structure produced a real furor and massive use of stone for a variety of purposes.
In agriculture, the problem of improving yields, increasing growth and increasing immunity of animals is always topical. Not long ago, researchers at the Institute of Poultry Studies studied the effects of shungite flour on birds added to feed. The results of the experiment showed a number of positive responses:
- The introduction of shungite flour into a full-fledged broiler diet provided an increase in growth by an average of 4.5%;
- Supplement in the form of a shungit additive to chickens, increased the intensity of egg production above the average by 4-5%;
- Inclusion of shungite flour at a dose of 3 kg per 1 ton of feed for 47 days ensured high daily average growth in live weight of experimental young (44 - 44.1 g), the living weight of which was 2106.9 - 2113.0 g, which is higher than the control on 5.34-5.7%;
- The weight of eggs was slightly higher than the average;
- There was a slight increase in protein in raw protein;
- The content of vitamins in the eggs of groups A, B tended to increase;
- Introduction of shungite water in the diet provided an increase in immunity.
The presence in the mineral of biologically active components, useful microelements, necessitates its use in agriculture. It is worth paying attention to its bactericidal and energy properties and, as a consequence, its use in medical and prophylactic purposes. Shungite flour is used as an additive to the basic diet at poultry farms, farms, as a fertilizer, both for mass planting and for domestic crops. From an economic point of view, the introduction of shungite mineral is beneficial and does not require large investments.