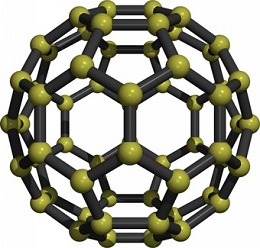 About the Karelian phenomenon - shungite - written various articles and even books, there are many conjectures, legends and myths. But what is this miracle really? Why shungite has incredible healing properties?
It's time for answers to turn to science.

Studies of shungite were conducted from the 18th century to the present day. And although scientists have not been able to fully understand all its secrets, it is possible and necessary to use useful properties right now. Modern studies prove that shungite is really unique.

In 1985, a world scientific sensation was the discovery of fullerene. Fullerene is a special component of the carbon matrix, whose molecular lattice of five-hexahedrons forms a hollow sphere. For some time it was believed that fullerene can be formed only in space or laboratory conditions. It really managed to be obtained synthetically. However, what was the astonishment of scientists when fullerene was found in samples of schungite sent from Russia. A unique molecular structure determines the incredible healing qualities of schungite. For the discovery of fullerenes, a scientific group consisting of American scientists: Kroto, Smalley and Curl in 1996 was awarded the Nobel Prize in Chemistry.

The name of fullerene is due to the American architect, designer, engineer and inventor Richard Buckminster Fuller. In search of harmony between nature and architecture, Fuller constructed the main pavilion at the world exhibition EXPO-67 in Sokolniki in the form of a giant metal hemisphere consisting of hexahedrons. In effect, Fuller created a huge model of the fullerene molecule, which was discovered only two years after his death.

In the modern science of physics, chemists and biologists have learned to fill the molecular voids of a fullerene differently, using it as a kind of vehicle. Physicists use fullerenes to create organic solar cells, chemical lasers and "molecular computers", as well as materials with high-temperature superconductivity. Chemists - as a new type of catalysts and adsorbents. Biologists and pharmacologists - for delivery inside the human cell various substances necessary for life: vitamins, hormones, medicines, etc. Scientifically established that fullerene, located in the shungite, is a powerful and long-acting natural antioxidant, and therefore a key to longevity.

9.84 USD
Success Add to cart
A single set of protection 5% off