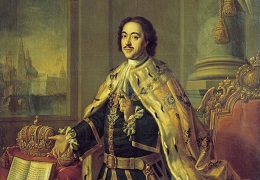 Tsar Peter I visited the resort four times - in 1719, 1720, 1722 and 1724. Especially for Peter, two oak lathes were installed in the palace, on which he carved a table, chairs, an armchair, candlesticks and other objects. During the life of the emperor, the source gained wide fame.
During these years, the article “Genuine inquiries about the effect of Marcial Konchezer water” was published, which contains nine brief descriptions of diseases with their outcomes after treatment with marcial waters. For the king and his family, palaces were built at the resort, which, however, quickly fell into neglect after the death of the emperor. The Marcial Waters resort has also ceased to exist.
Decades later, in the middle of the XVIII century. Elizaveta Petrovna tried to revive the first Russian resort. However, Leibmedik Bugayev sent to Olonets region returned to the empress with the conclusion that water from local sources does not have any healing power. Historians argue that this study was carried out, as they say, "to order", and the results were distorted in the interests of importers who imported expensive mineral water at that time from abroad.
As a result, the resort has been suspended for more than 150 years. Most buildings and palaces are dismantled. And only in 1910, in honor of the celebration of the 300th anniversary of the house of the Romanovs, a small house was built on the site of the “Tsarevina key”.
The official decline of the resort had no effect on the locals, they continued to use the life-giving water from its sources. Periodically increased interest in them and scientists. New life resort received in the 30s. XX century. thanks to the activities of S. A. Vishnevsky. He organized an expedition to study the Marcial Waters, the results of which confirmed their unique healing properties. However, at that time the war prevented the restoration of the resort, and it began only in 1960.
In 1960, modern buildings with the newest equipment were rebuilt, and the first Russian health resort started working with a new power.

5.73 USD
Success Add to cart
Tester for testing the electrical conductivity of shungite